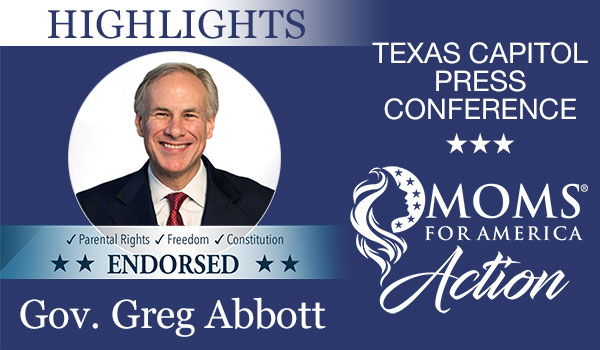 Moms for America Action, the political action arm of Moms for America, representing thousands of moms and conservative families around the nation, today endorsed Gov. Greg Abbott for re-election.

Texas is at the forefront of the fight against far-left efforts to erode our constitutional rights, defund the police, and keep our borders open. All over the Lone Star State, parents have gotten involved in their children’s education, demanded a return to law and order, and are turning out to VOTE for candidates who will secure our southern border. We’re proud to endorse Gov. Greg Abbott for re-election. A press conference was held Thursday, Oct. 20th at 10am at the Teas Capitol on the South Capitol Steps for Gov. Greg Abbott.