Kim Fletcher article on Townhall: “Esther and Jezebel Are in a Holy War and the Mothers of America Will Determine Who Wins” 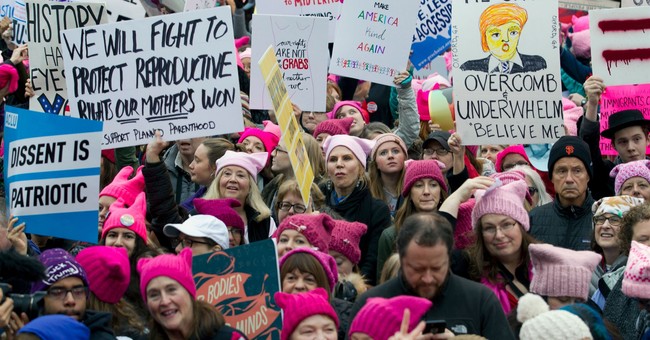 The nomination of Judge Brett Kavanaugh has opened a new era of malcontent, disrespect, and utter disregard toward the United States Constitution and the people called to defend and protect it. And while our own members of Congress are obstructing the process, it is radical, militant feminists who are leading the charge.

Since the 1960s there has been a holy war waged among the women of America which has intensified to such extreme levels it even caught me off guard, but it shouldn’t be surprising. It is, after all, the natural course of being fed steady doses of feminism for 50 years.

For five decades feminists have been demonizing our men and boys, demoralizing women and girls, marginalizing motherhood, endangering our children, and pushing their radical socialist agendas at all levels of society. Feminists have been slowly injecting their venom of destruction in our culture behind closed doors, concealed in secret code-words, and hidden agendas for over 50 years. But in January of 2017, they gave us the biggest gift ever—they finally unmasked themselves and showed the entire world who they really are.

Feminists have become so comfortable with the results of their decades-long war on society, they’re now openly celebrating it. While these radical feminists paraded in their “pussy hats” and vagina costumes celebrating their “nastiness” the Silent Majority of women in America watched on like deer in headlights, wondering how we got here, why women would behave in such an offensive manner, and why the heck the media would give any credence to it. When mothers saw their children’s teachers parading through the nation’s capital with those pink hats and “grab this” signs they suddenly realized the battle for our children’s hearts and minds is much closer and more intense than they ever imagined.

The sad fact is, feminism has infiltrated every aspect of our society—media, education, textbooks, entertainment, publishing, business, even our churches. They have been slowly infusing their radical agenda in steady doses, in the name of women’s rights, for decades. We’ve seen it on full display at the Kavanaugh hearings. But we can also see it in their own words.

Robin Morgan, a feminist and editor of Ms. Magazine declared: “I feel that ‘man-hating’ is an honorable and viable political act.”

Linda Gordon, another well-known feminist said: “The nuclear family must be destroyed.”

Shelia Cronin, from the National Organization for Women, said: “Since marriage constitutes slavery for women, it is clear that the women’s movement must concentrate on attacking this institution. Freedom for women cannot be won without the abolition of marriage.”

But Andrea Dworkin, author and feminist, tops them all. “Under patriarchy,” she said, “every woman’s son is her potential betrayer and also the inevitable rapist or exploiter of another woman.”

At what point does a mother hold her son in her arms and shudder thinking, “Oh my gosh, you’re going to be a rapist?” I mean, who does that?

Feminists from the Women’s March put out a series of emails over the course of the Kavanaugh hearings calling on women to “put their bodies on the line” to disrupt the hearings “in an effort to delay or cancel them altogether.” They used their disruptive protests to raise money to keep the chaos going, stating: “We’ve made sure that the Senate hasn’t had a moment of peace since they started the confirmation process for Brett Kavanaugh.”

They called it brave and a show of integrity stating they were proud to be at the front of the “people’s resistance against Trump’s white supremacist administration.”

The more radical they get the greater the divide becomes between feminists and the silent majority of women distancing themselves from them. But there is good news. Knowing it is women destroying our Republic also means it is women who can save it!

“The hand that rocks the cradle rules the world,” isn’t just a cute little saying. It’s an immortalized fact. Women are at the very heart of society; laying the foundation for the future.  We have been at the rise and fall of thousands of years of civilizations.  Even the Bible tells us of the far-reaching influence of women.  While Esther saved an entire nation, Jezebel brought one down.

Women are a powerful influence.  We always have been and we always will be. The only question we have to decide is what kind of future do we want—the one feminists are promoting with their culture of death, assault on freedom, and attack on everything good, true and beautiful, or the one where liberty prevails, God is respected, and families are free and prosperous? If you want the latter then stop calling yourself a feminist because you aren’t one.

Frances Cobbe, one of the early leaders in the Women’s Movement during the turn of the century, became very concerned with the direction the movement was taking stating she was concerned with the adoption of looser and more Bohemian manners and laxity of judgment toward grave moral transgressions.

She said, “These faults and mistakes constitute deadly perils to the whole movement for the advancement of women, and with all my strength I would implore every woman who sympathizes with that movement to set her face like a flint against them. It is our task to make society more pure, more free from vice than it has ever been before…If women were to become less conscientious, less unselfish, less temperate, less chaste, then I should say, ‘For Heaven’s sake, let us stay where we are! Nothing we can ever gain would be worth such a loss.’”

I think those original organizers are turning over in their graves to see what the Women’s movement has become! Everything those women fought for we have already won. Now it is up to us to gain back what society lost in the process. It’s time for the Esthers to rise up. The Jezebels have done enough damage.

The views in this article are solely of the author and not representative of Moms for America Inc.