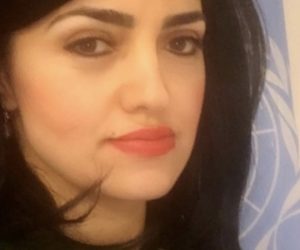 Rabia Kazan knows first-hand what it is like to live and work under oppression. We are thrilled that she has joined the Moms for America Advisory Board in 2019 after a long and distinguished career fighting for freedom in the Middle East.

Rabia Kazan started her career as a journalist for Flash TV’s Istanbul Documentary in Turkey. She went undercover to document child marriages, forced prostitution and the strain of life under Islam. Born a Muslim, she decided in 2012 to renounce the hijab she had worn since the age of seven. For this courageous decision, Kazan has faced death threats.

Since moving to the United States in 2010, Kazan has become a well-known advocate for women’s rights where they are most threatened–in places like Iran, her native Turkey and across the Islamic world. Kazan has supported President Trump’s stance on radical Islam and encouraged moderate Muslims to oppose radicalism. She now serves on the president’s National Diversity Council.

Rabia Kazan married Italian lawyer and politician Giacinto Licursi in 2008. She launched the This is Not My Allah campaign in 2014 to be a voice for Muslims who break with radicalism.

To learn more about the incredible women of our MFA Advisory Board, visit: https://momsforamerica.us/mfa-advisory-board