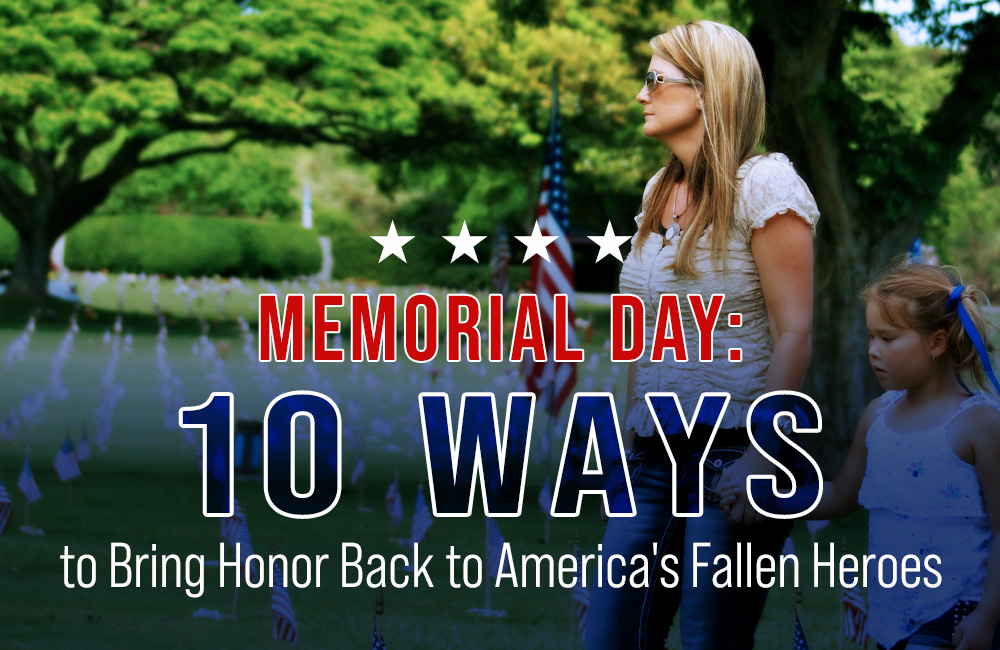 True honor is in short supply these days.

You’ve seen it. Ridicule of traditional values, attacks, canceling, and even tagging honest online discussion as “disinformation.” A knee is taken at football games, even as our American soldiers, sailors, airmen, guardians, and Marines stand, defending freedom for protesters and patriots alike.

But you’re not bound by the drama played out in the news and social media. As moms, you hold the key to America’s future. You value patriotism and honor in the public square and in your home.

That’s why we’re calling on you to do something a little different for Memorial Day this year than the traditional backyard barbecue. You can start a family tradition to honor military men and women who have sacrificed all for the liberty we enjoy. When you make this an annual family event, what you do today will be carried forward by your kids.

Need ideas? Here are 10 ways to bring honor back to America’s fallen heroes:

1. Get to Know Memorial Day

This year’s commemoration is a great time to educate yourself on what it’s all about. “Decoration Day” was initially established by General John A. Logan. He called for citizens to lay flowers on the graves of the Civil War dead, “whose bodies now lie in almost every city, village and hamlet churchyard in the land.”1

Memorial Day would later become an official holiday in 1971. The last Monday in May was decreed a federal holiday by Congress that would honor fallen armed service members from all America’s wars.2

After you get to know Memorial Day, take a deeper dive into the foundations of our nation. Sign up for our free Healing of America Virtual Series or join a Cottage Meeting to connect with other moms.

You’ve probably heard the term “Gold Star,” referring to families who lost a beloved armed service member. What might Memorial Day be like for them? If you know someone who fits this category, why not send a card, or drop off a gift, a meal, or flowers to let one of these military families know that you care.

Make sure your kids are part of this honoring gesture. If they don’t live nearby, you could call or send a card to honor a Gold Star family. Be sure to let them know you’re thinking of and praying for them.

3. Take a Virtual Trip to a War Memorial

There may be limited time and budget to trek to a military monument this year. Still, thanks to technology, there are virtual tours available. As you take a virtual trip to a war memorial, teach your kids about the meaning and creation of the site. Encourage them to ask questions and if you don’t know the answer, look it up!

It doesn’t matter if it isn’t military – take your children to visit a local cemetery. The solemnity of a graveyard is the perfect setting to share about Memorial Day. Talk about Arlington National Cemetery with its vast expanse covered with the graves of soldiers. Explain the laying of the wreath on the Tomb of the Unknown Soldier.

Be sure to share about other military cemeteries and memorials scattered around the world in France, Belgium, Italy, the Philippines, and more. Explain how the U.S. military has been deployed worldwide, helping other nations defeat brutal regimes and serving in many ways.

Share a story of a fallen soldier from distant history or a more recent loss in that solemn setting. Read John 15: 13, “ Greater love has no one than this: to lay down one’s life for one’s friends.” Talk about what that means in this context.

Watch The National Memorial Day Parade (Monday, May 30, at 2:00 pm E.T.), which will be televised live from Constitution Avenue in Washington, D.C. This stirring event features tributes, music, and honored veterans.

6. Talk About Your Family’s History of Service

Do you have any family members who were military personnel? A grandfather, who served in Vietnam, or a great aunt who was a nurse in World War II? Talk about your family’s history of service by telling their stories to your children. Show pictures of them, or the war they served in (if you don’t have access to family photos). Consider posting a tribute to that soldier on social media to show gratitude. You’ll also give your circle of friends a glimpse of how your family honors our military and nation.

7. Observe the National Moment of Remembrance

Gather the family for a minute of silence at 3pm on Memorial Day. Observe the National Moment of Remembrance. After that silent commemoration, have family members take turns saying a prayer. Assign each one of the following to pray for (add more prayer points if you have a large family present):

8. Fly the American Flag and Wear a Red Poppy

Display the red, white, and blue prominently at your home on Memorial Day. There is a tradition to display it at half-staff until 12:00pm and then raise it to full height for the rest of the day. Another way you can show your support is to wear a red poppy. It was inspired by a poem from World War I from a military doctor who wrote about bright red poppies on a battlefield.3 Either is a great way to display your patriotism to your community, so why not do both: fly the American flag and wear a red poppy!

9. Give a Donation to a Military Charity

Make a plan as a family to give a donation to a military charity in honor of Memorial Day. There are many options to choose from. Talk it over together and consider several carefully. Let your kids weigh in on the decision once you’ve explained what the various non-profits do for veterans and their families.

10. Enlist Your “Troops” to Plan a Family Celebration

This is a DYI event where you enlist your “troops” to plan a family celebration. Together you can create a one-of-a-kind event to honor the day. It could result in a tradition that your kids will look forward to each year! Here are some ideas:

Mamas, there’s something so meaningful about turning Memorial Day into more than just a cookout or a day to herald the beginning of summer. The day is thick with stories of military service and meaning as our hearts swell with gratitude for those heroes of American history we’ll never know but always revere.

Ronald Reagan said, “… And if words cannot repay the debt we owe these men, surely with our actions we must strive to keep faith with them and with the vision that led them to battle and to final sacrifice.”4

Happy Memorial Day, mamas. May God bless America and all who made her free.