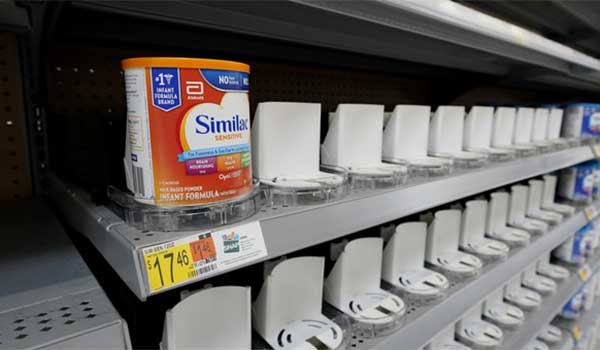 The ongoing shortage of infant formula shows that Joe Biden and his administration will not prioritize the American people. Biden’s cronies are too busy pressuring the Justices of the Supreme Court to uphold the unjust Roe v. Wade decision to notice that American families are scrambling to find adequate food for their babies. According to the Left, ensuring the “right” to end the lives of babies in the womb is a more important issue than feeding babies already born.

This crisis did not happen overnight. Senator Marsha Blackburn (R-Tennessee) noted, “The White House knew about this issue back in October. The FDA has not worked with Abbott (the baby formula manufacturer) in a productive manner to get this back open.” Months ago, Biden’s FDA shut down one of the largest formula manufacturers with no plans to replace that massive shortfall in the marketplace. Now, most places are 40 to 50 percent out of formula.

Any mother who has fed a baby with formula knows that you cannot just pick any brand off the shelf. Many babies, especially those with special needs, respond best to certain brands. The situation has forced many parents to search for hours, driving in a time of unprecedented gas prices to find the nutrition their growing children need.

While American moms are searching from store to store for formula, news broke on the border about a formula surplus. Representative Kat Cammack (R-Florida) has been calling for accountability in the Biden administration. Earlier this month, Cammack received pictures from facilities where border agents discovered a stockpile of formula, which allegedly continues to grow as American grocery store shelves are increasingly empty. Cammack told Fox, “These agents themselves have families, and they have family members that can’t get this baby formula in the stores in Texas and Arizona and New Mexico. Yet they go to work, and they’re unloading pallets of baby food out of the back of tractor-trailers. It’s outrageous. If you have to sum it up, this is exactly what America last looks like.”

No one is suggesting that the migrants arriving on the United States border should be denied the formula they need, but Cammack pointed out that Biden’s invited them here in the first place with their lax border policies. The outrage about overcrowded facilities at the border has disappeared. Biden made clear that the law will not be enforced, and illegal immigrants have flooded our southern border. Not only do these migrants have formula, they have more than they need in a time when American moms are panicking about where to get formula for their babies.

Predictably, left-wing media accused Cammack of lying and tried to bury the story. Cammack rose to the challenge. She told Fox this week, “Yesterday I was on the border myself and the facts on the ground are exactly how we have been stating them.” Since Biden’s pals in the media wanted to ignore and discredit Cammack and border patrol agents on the ground, Cammack went in-person to the border facilities in question and filmed what she saw. She reported, “Lo and behold, not only was there stocked warehouses, but there were multiple stocked warehouses that have been not only filled with baby formula, diapers, wipes and clothing, but they have been doing this for months and there’s more en route.”

We continue to hear crickets from the Biden administration. What we are witnessing is the end result of a plan to undermine America. When politicians are so busy demanding that abortion be legal and widely available that they cannot manage a crisis in the supply of baby formula, we are seeing the beginning of the end of America.

Thankfully, Biden does not have the last word. American moms are demanding answers and bringing the truth to light. The baby formula crisis will be an issue that drives mothers to the voting booth this fall and in 2024. Moms know that our children are the future, and we will not stand by while they are threatened.