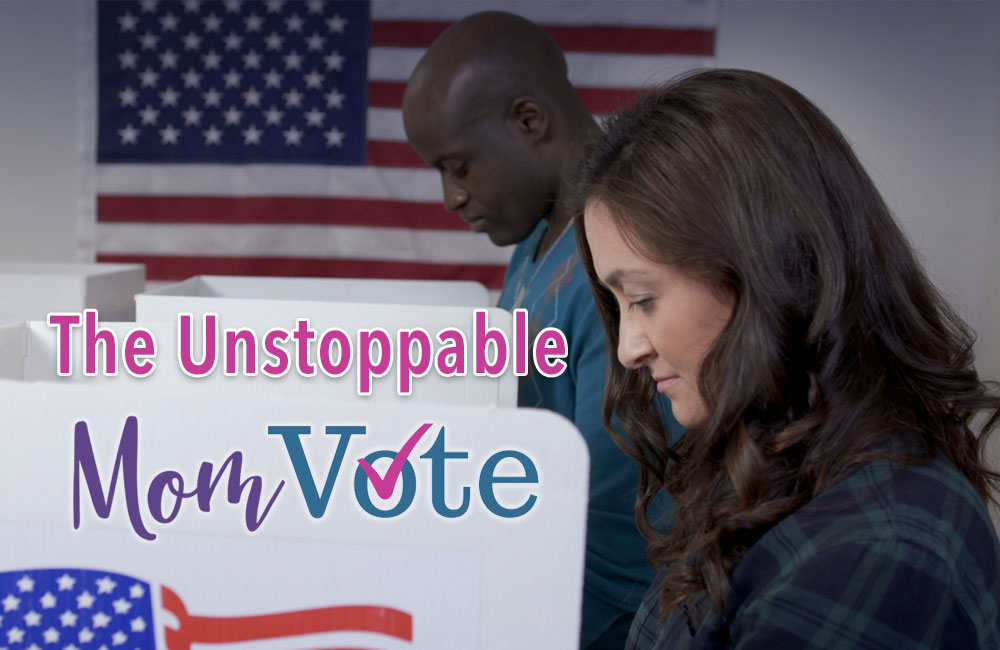 The Unstoppable Mom Vote: Here are 4 Ways it Can Save America

You’re a busy mom. And maybe you also manage a career – or perhaps you’re the principal of your own homeschool. We understand.

From any angle, it’s more than a full-time job.

Given the long days, it’s easy to live in a state of tunnel vision, rightly focused on your own dear family. But something has happened over the last two years, and moms like you have begun a movement.

We saw our kids locked up in zoom class isolation, with agenda-driven narratives from teachers who we finally got to see on-screen in action.

Some schools reopened – some waited and waited. Then, outspoken politicians and school officials told us that we didn’t have the right to weigh in on what’s taught in the classroom. Even the National School Board Association brashly labeled parents who dared to speak up “domestic terrorists.” 1

Moms across America began to wake up and take notice. And act.

Concerned parents have been running for school boards and winning. Virginia saw its governor’s ousting in favor of one who promised fixed schools and protected parental rights. The upset was credited to Moms who came out to vote in force.

Your vote and voice are vital to our nation and the next generation. The country is waking up to recognize the unstoppable mom vote: here are four ways it can save America.

#1 Vote in EVERY Election

We have more power than we sometimes realize.

Believe it or not, women have only had the right to vote for 102 years. Sounds like a long time but think about it – that’s only a little more than one lifetime. In August of 1920, the 19th Amendment passed, and that November, America’s first women voters flooded the polls eight million strong. A great start, though only a tiny number compared to the men who voted that year.2

Fast forward to now- since 1980, women have eclipsed men in voter registration and turnout. We’ve found our voice.

Polling revealed that 68% of eligible women reported casting a ballot in the 2020 election (Men landed at 65%), and those votes were split between Republican, Democrat, and Independent. It also means a whopping 32% of women aren’t voting.

While the data doesn’t point to how many are moms, we know you’re in there. The bottom line is that your vote is needed to support candidates and ballot measures you believe in. Elections matter. They create the path forward for what America will become and what the future holds for our families.

In the flurry of a busy life, it’s easy to be lulled into a sense that our vote isn’t that important. But you are a history maker. Because our culture seems to have dug in with those who loathe traditional and patriotic values, your voice is vital.

Be sure to include your children as you participate in elections. If you can, declare a family holiday on election day, with special food, a break from regular “work” activities, and a family gathering with popcorn to watch the returns!

The ball is in your court, Mamas. When you vote in every election, your choices ring loud and clear. If you’re unsure where to start, we’ll make it easy. MomVote was designed just for you. You can register to vote and find all the information you need, including an interactive map that will allow you to get the skinny on the national and local races.

Pro-Tip – Before November Vote – Review our 2022 Congressional Report Card: Get the facts about what the candidates stand for. Social media, television, and radio will be filled with heavily-funded attack ads. Candidates will even produce messages that sound a bit like the other party- they hope to fool people into thinking they are standing for traditional American values. Our 2022 Congressional Report Card has the documented truth about where these candidates really stand. It will clear the air as you prepare to cast your ballot!

#2 Spread the Word to Other Moms

Get the word out. When you get together for coffee, a MOPS group, Cottage Meeting, or other gatherings, remind your friends about the importance of casting their ballots. Feel free to send them to our website for our easy MomVote onramp.

Spread the word to other moms that the voting process doesn’t have to be complicated and is vital. If you can increase voter turnout even with your circle of friends, you magnify the effect on your community, state, and nation.

Explore the issues vital to you as a mom in conversation. Keep things friendly, and don’t be afraid of differing opinions. That’s one of the things that makes America great and free!

Pro-Tip: Positivity Wins the Day Barna’s research revealed that nearly a fourth of voters had relationships negatively impacted by the 2020 election.3 Along with the pandemic, lockdowns, nationwide riots, and murder hornets (of all things!), 2020 was already a lot to work through. Stress and passion ran high. Going forward, we’ve all got to take a breath, listen well and sometimes agree to disagree. Take a moment to collect your thoughts before giving your point of view and consider others’ feelings. Your opinion carries more weight when you engage in open and welcoming conversation.

#3 Get Involved in Local Elections

It’s time for moms to dive in. You could volunteer to be a poll worker for an upcoming election, like the mid-terms this November. Both parties host voter registration drives, so you could be part of that effort.

Another option would be to become a poll watcher for your party. Given the dissent and concern over previous elections, you can be part of securing the voting process. Helping to safeguard your local poll will give your community confidence that the vote was correctly handled.

On election day, if you’re voting in person, another idea is to give rides to friends, family, or anyone you know who might have transportation or mobility issues.

Modeling on-the-ground efforts when you get involved in local elections can inspire and influence your children. Your example will give them a deep sense of civic responsibility’s importance and the power of the voting booth.

Is it time to take your efforts to another level?

More moms are running for school boards and local offices, like the city council, the sheriff’s office, or even your state legislature. It might sound like too much to consider but start by committing any ideas or ambitions you may have to the Lord. Prayerfully consider what God guides you to do before making a move. Then, if you feel that leading to run for office, and your family is supportive – go for it!

Remember, there are people in some positions who haven’t been acting in the parents’ and kids’ best interests, so someone needs to help fill those soon-to-be vacated spaces!

There are 85 million moms in America.4  We are a mighty force, and it all begins with you, mama. Some may have thought we’d be too busy or distracted to get involved, but recent efforts show that’s no longer true.

A mama bear revolution has begun.

Your voice and vote matter and your needed participation in our elections will move mountains for your children’s generation and beyond. Let’s do it together!