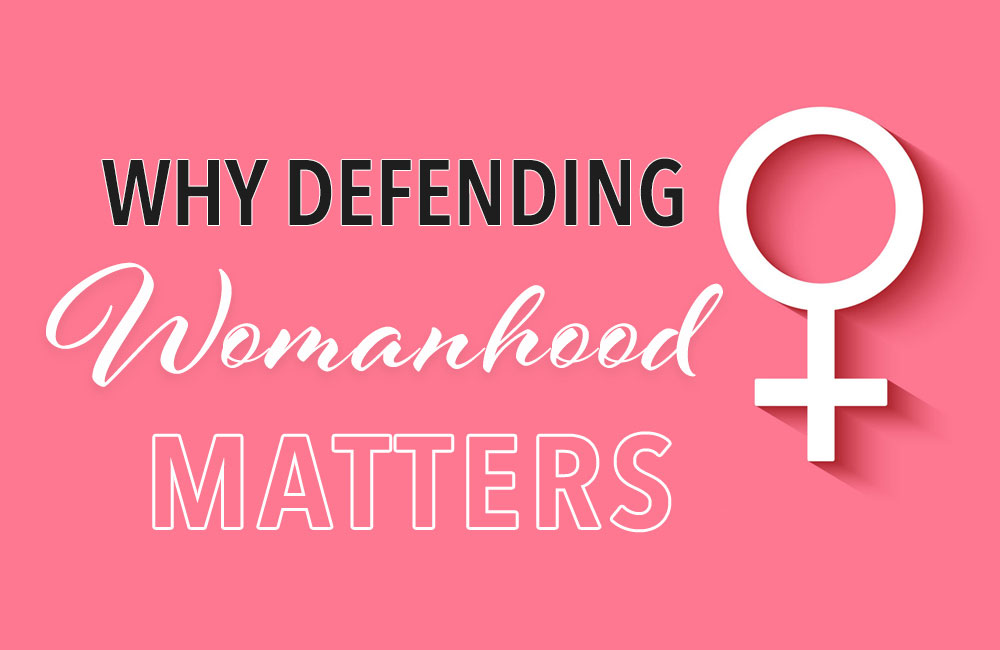 When the “Woman of the Year” is a man, the women’s college swimming champion is a man, and a female Supreme Court nominee can’t even define the word “woman,” it’s safe to say we have a problem.

And somehow, we’re told, this is “progress,” while fake feminists and progressive fragility stand in the background in silence.

Rather than camp on What on earth has happened?, let’s move to the answer. We need to defend womanhood. Not just women, but men, too.

It’s about preserving a nation that honors God, His creation, and His design for the family and government.

Defending womanhood is about protecting our God-given rights. It’s about taking a stand against those who are attempting every day to override those rights, erase God and morality, and enact tyranny all the way into the realm of the family and home.

It matters to mothers, grandmothers, daughters, sisters, and aunts.

It matters to mothers raising daughters to develop a positive self-image and espouse a strength based on who God created them to be. It matters to the girls who need to be affirmed by their femininity, not devalued by those who cheaply and hastily switch their gender as if it had no meaning.

That’s what we need to ask ourselves. Why do men think they need to become women? Aside from being disturbed, have they also struggled with anti-male rhetoric that has purveyed so much of society today? You can’t even walk into a men’s clothing store and see masculine clothing anymore. Why? Let men be men so women can be women.

It matters because womanhood is a gift from God that can be mimicked but can never truly be replicated.

A woman, by design, is created unique – spirit, soul, and body.

With their unique biological, mental, emotional, and spiritual qualities, both women and men are critical to the foundation and strength of the family and society.

Womanhood, by design, is nurturing, life-giving, protecting, defending, mothering, bold, courageous, strong, beautiful – qualities that so perfectly complement those of a man. Make no mistake; it is not something you choose any more than you choose your race.

When you make womanhood optional, you reduce it to a choice rather than embracing it as a gift. You devalue womanhood worldwide when you make a woman nothing more than a wig and a dress. And you dishonor God.

It matters to the women who fought for the right to vote, who pioneered the accomplishments found in Title IX, now flushed down the toilet.

It matters to those who have accomplished genuine female achievements and served as examples to young girls everywhere striving to be their best.

It matters because a healthy society is based on a solid foundation – the family – and the unique qualities found in both men and women.

It matters because womanhood is more than a choice to wear makeup and undergo plastic surgery.

It matters to the daughters we are raising and those who are yet to be born. It matters to these young girls who need to develop a healthy self-image and one that is sure. They need to know their value and who they were created to be – the beautiful distinctions that set them apart.

It matters to all children everywhere that we provide them with a stable society where they can thrive and grow without those who perpetrate immoral values while pressing them to conform.

If up is down, right is left, and a man today can be a woman tomorrow, we aren’t doing right by our children, plain and simple.

Teaching children that they can choose their gender encourages them to turn their backs on God, forces them into a state of confusion, and unnecessarily puts them in the middle of today’s politics.

It matters because as important as women are to society, men are equally so.

We need men to be men.

Men have wonderful giftings from God that make for a strong and healthy society. We need them. We need them to be who they were created to be. We need fathers and grandfathers, sons and uncles, coaches and mentors. Families are better for it with men in the picture. So are nations.

Let men be men and women be women.

A woman brings life, truth, strength, stability, and glory to her family, community, and nation.

No, it isn’t harmless to let men claim to be women. It’s damaging. And the long-term effects we have not yet even begun to see.

It matters to you and to me.