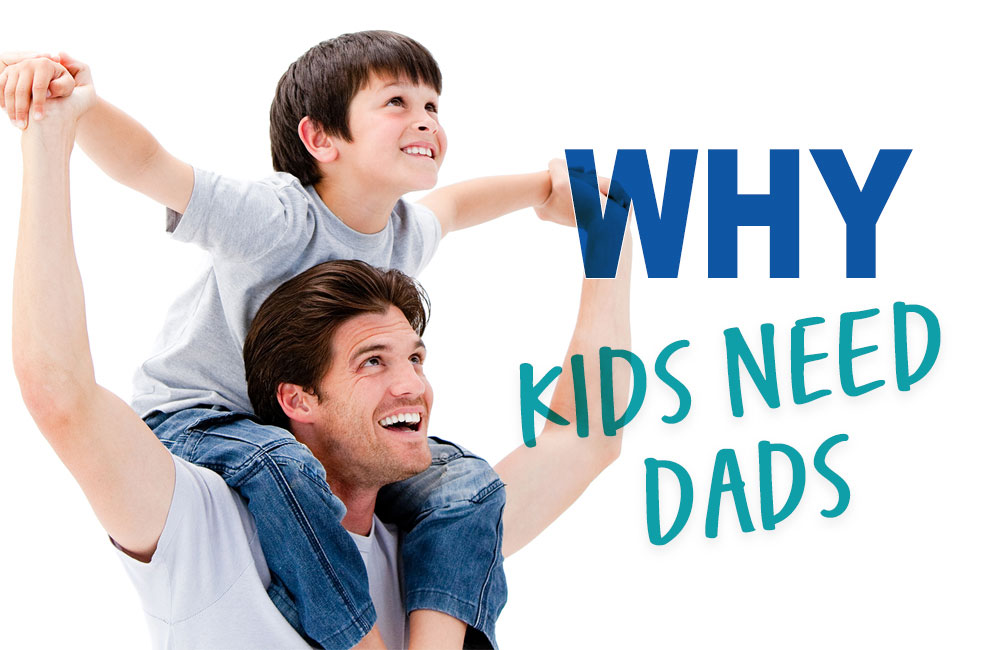 This is Moms for America. Yes, we’re about the moms.

But here’s a newsflash…. moms love dads. And while our organization exists to empower moms as the influencers in the heart of their homes, we highly value the fathers of our children, and our own dads, too.

In fact, we recognize that it is moms and dads together that make for a strong family and firm foundation for our nation. Even more, the love of a father is an example of the love of our Heavenly Father for us.

We salute you, dads! And in case you didn’t already know, here’s why kids need dads – and why us moms need you, too.

Aside from being a whole lot of fun, dads make kids happy for a host of other reasons.

Kids with actively involved loving dads are far more likely to have a strong sense of well-being. They also have lower rates of depression, suicide, and self-harm and have far lower stress levels.

Good dads make kids happy and that shows in their overall social and academic success. Research has also found that dads who spend regular time alone with their children produced compassionate adults.

Now known as the new idea of “privilege,” two-parent homes where a dad is present and engaged, yield the most successful kids.

Research shows the following about kids raised in two-parent homes:

The stability of a two-parent home does far more for children than we may ever know. Dads bring something to the table moms don’t have – and vice versa. God designed it that way. And He designed the family to be strong with both a mother and a father.

We moms are nurturers. Sure, we can be fun, too. But not dad fun.

Dads play differently with their children. Dads are fun for kids because they are more physical and vigorous during playtime. And while mom is tending to the needs of the household, dad has no problem stopping what he’s doing to play, wrestle or just hang out.

This kind of fun is good for kids because it gives them that all-important love language of quality time, but also helps them exercise self-control and learn to interact positively with others.

The look, the “I’ll turn this car around,” and the promise of a good punishment sure gets kids to behave well!

Research shows that children with dads in their lives are more likely to behave well. Dads promote good behavior because they naturally stand in the role of disciplinarian. When that discipline is firm and fair, it is very healthy for kiddos. They feel secure and learn the much-needed behavior and skills to succeed in life. Thanks, Dad!

Dads help kids to think of themselves more highly. The more dads interact with their kids, the more the children develop a strong self-esteem. It’s a wonderful, natural result of a dad being present in the lives of his children.

Dads help kids feel confident just by being present. Encouraging words make them even more so. Conversely, children who don’t have a dad in their lives struggle with self-doubt even into adulthood.

Dads speak up for kids, too! Listen to our podcast where a dad shares how a school board tried to silence him for speaking up on behalf of his kids HERE.

We have no scientific research to back this up. And this may be highly debatable. But even if they aren’t good or funny – for some reason, we love them anyway!

Dads tell good jokes. Not because they are fresh and clever (they’re typically quite corny!), but because they’re meant just for us. Dad jokes remind kids (and moms, too!) that we never need to take life too seriously and that there’s always something to smile about.

We here at Moms for America are so grateful for the dads in our lives. We’re thankful for the support we have in this role of raising the next generation. And we’re honored to have the opportunity to show honor, love, and respect to fathers everywhere.