You Can Call the 2020 Election Anything You Want 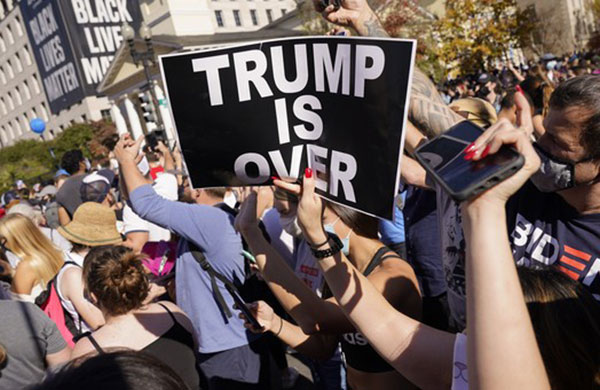 You Can Call the 2020 Election Anything You Want, But Don’t Dare Call it Conspiracy

You Can Call the 2020 Election Anything You Want, But Don’t Dare Call it Conspiracy

Franklin D. Roosevelt explained it all when he said, “In politics, nothing happens by accident. If it happens, you can bet it was planned that way.”

As our country unravels before our eyes, millions of people who flooded to the polls to vote for freedom are dumbfounded. Many, like me, who didn’t vote for Donald Trump in 2016, proudly marched to the polls to vote for him in 2020. After years of promises and political games, we finally had someone in the White House we could believe in; someone who solved problems instead of creating more;  someone who cared more about the future of our country than their own personal gain. Donald Trump is a fighter at a time in our nation when a fighter is what we need the most. And that is why “They” have hit him with nonstop attacks from the day he announced his candidacy; and it is why “they” cannot, will not, let him win this election.

So, who are “they,” and how did this happen?

Gary Allen reveals both answers in his short 112-page book, “None Dare Call It Conspiracy.” Written in 1972, the book was the result of Allen seeking to prove the conservative anti-communists wrong; that there was no communist conspiracy attempting to take over the world. After months of exhaustive, intensive research to prove the “kooks” wrong, he ended up proving them right.

Allen states, “…the first job of any conspiracy, whether it be within, politics, crime, or a business office, is to convince everyone else that no conspiracy exists.”

Just turn on any news channel and you’ll get a big dose of that. Anyone who has ever worked an election knows there’s voter fraud. I’ve seen it firsthand. Rules don’t matter to Democrats and Republicans don’t seem to care. My seven years in the battleground state of Ohio revealed this, as I’ve previously written about, though it barely scratches the surface of the fraud I witnessed.

Sometimes conspiracy theory is conspiracy fact. What we are seeing unfold before our eyes is proof of that. The fact that anyone who questions this election is lumped into the rank of “kooks” proves what Gary Allen discovered is true.  It is all a carefully orchestrated conspiracy on a grand scale, funded and masterminded by international bankers using everything from global warming to race riots to usher in a Communist “utopia” wheretheyare the only winners.

Okay, now you’re wondering if my tinfoil hat is on straight, right?  I get it, it sounds absurd, but truth often does when it comes to those trying to destroy our Republic, and Communist elitists have been laying the groundwork of destruction for decades. Students of history know where we are and where it leads. The rise of the Soviet Empire wasn’t accomplished with tanks and guns. It was done by men in three-piece suits positioned in places like Election Commissions showing up at just the right time with the ballots they needed to secure their victory.

Scott Uehlinger, a former CIA Station Chief, talked about this in his interview on the Scott Baker Radio Show. History is repeating itself right before our eyes. The United States of America is being pulled into the Communist Soviet Union and the American people don’t even realize it.

Well, let’s look at where we are and how we got here because it didn’t start in 2020. It didn’t even start in 2016. It began in 1913 when a group of American bankers and Communist elitists used their power and influence to lay the seeds of communism through the Federal Reserve, Compulsory Education, and the 16th and 17th Amendments. Every year since then has been a chess move, patiently passing on the destruction of our Constitutional Republic from one generation to another like an elitist inheritance.

While we’ve been working night and day pursuing our American dream and enjoying the blessings of freedom, the Communist Elitists were quietly unraveling the Republic one thread at a time. They inserted Communist propaganda into our schools, they infiltrated our culture through Hollywood, media, and literary agencies. They gained positions in corporate leadership, universities, law firms, science and medical fields, lobbying agencies, and NGO’s. They dumped millions of dollars into political campaigns, buying elected officials at all levels of government and focused on races like Secretaries of State and election commissions that most of us ignore. The culmination of their century-long steady and patient groundwork, aided by Covid, led to the prefect storm enabling them to finally install their ideal Manchurian Candidate.

Aleksandr Solzhenitsyn, an outspoken critic of the Soviet Union and Communism, wrote a “Warning to the West.” Solzhenitsyn spent eight years in the Gulag, which led him to author several books and short stories raising global awareness of the plague of communism. He lamented how astonishing it was that the horrific evil of communism has been openly written about, and yet people turn a blind eye to it. “It’s perfectly amazing,” said Solzhenitsyn, “everyone is literate, yet…humanity acts as if it does not understand what communism is, as if it does not want to understand.”

This is not a “new normal” I am willing to accept. While the rest of the world is vying for the top bunk in the Gulag, I’ll be living in a cave with my family, bible, guns, and Patriot’s Supply of food because that’s how much freedom means to me.

This is not a time to conform.  It is time to stand up and fight for what we know to be right and true. We may lose the battle, but the war is ours to win.

Celebrating the Founding Fathers and Our Flag this Father’s...

Critical Race Theory Teaches Our Children to Hate Their Country,...

Proposed Marshall Plan for Moms: We Can’t Put a Price Tag on the...