Democrats Don’t Hate Guns, They Hate Anyone But Them Having Guns 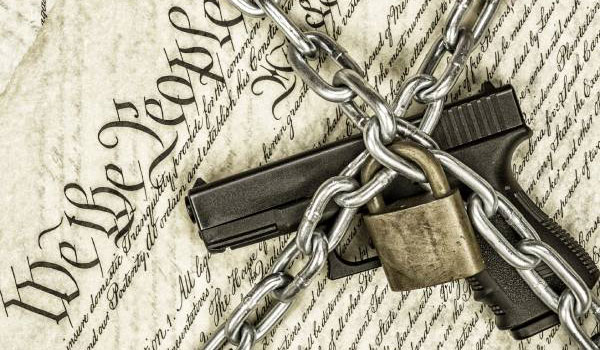 In the past year, we have seen “defund the police” go from being a fringe pipedream to a mainstream talking point. The radical idea that we should disband the law enforcement we rely on to keep the peace in our communities is now considered socially acceptable.

Teachers’ unions and leftist-run cities are signing on to “defunding the police.”

The results of this insanity have been predictable: a sudden and significant increase in violent crimes. This anarchy unleashed on our city streets has left mothers to defend themselves and their children.

Mothers are often the ones dropping children off at school, venturing out to public parks, and doing the family’s shopping. When crime increases across the board, women and children are at risk.

The average police response time is three minutes. In the span of three minutes, a shooter can empty an entire clip.

My gun is my protection — and my children’s protection — until the police arrive. If Democrats or anyone opposed to the Second Amendment have their way and cut off funding to our police departments, those response times could be much longer and the need for protection much greater.

Women, like all Americans, have a constitutionally protected right to defend themselves and their children. The Founders knew this was not a right invented by the government, but a fundamental right given by God to preserve and defend our lives and our freedoms.

Modern leftists want to pretend that the Second Amendment was put in place to protect people’s right to hunt deer. We know for a fact that the Founders were not primarily concerned with recreational hunting.

Patrick Henry warned, “Guard with jealous attention the public liberty. Suspect everyone who approaches that jewel. Unfortunately, nothing will preserve it but downright force. Whenever you give up that force, you are ruined …. The great object is that every man be armed. Everyone who is able might have a gun.”

As Henry notes, the constitutionally protected right to life, liberty and property is meaningless without the ability to defend that right.

Yet Democrats continue to use every tragedy and accident related to firearms as another opportunity to do away with the Second Amendment and forbid law-abiding citizens from owning and carrying guns.

This ploy by the Democrats does not address the causes of gun violence. More importantly, outlawing guns endangers law-abiding citizens.

As Thomas Jefferson wrote, “The laws that forbid the carrying of arms are laws of such a nature. They disarm only those who are neither inclined nor determined to commit crimes. … Such laws make things worse for the assaulted and better for the assailants; they serve rather to encourage than to prevent homicides, for an unarmed man may be attacked with greater confidence than an armed man.”

The reality is that for many women, carrying a weapon is a way of preventing violence. A woman who is trained and confident in handling a weapon can sometimes prevent an attack from occurring.

There are many examples of such situations, as in the story of a mother of five who drew her gun to scare off two would-be attackers in a grocery store parking lot or a young woman living alone who used a gun to prevent her neighbors from attacking her.

When Democrats threaten to take away our guns, violating our God-given rights, they are taking away our ability as women and mothers to defend ourselves in dangerous situations. Disregarding the Second Amendment leaves responsible gun owners unable to stop a mass shooting when it occurs or prevent a violent attack or robbery when it happens.

The next time you hear Democrats talking about curbing the Second Amendment, remember they are not talking about taking guns from dangerous criminals — the criminals and the government will still have guns whether or not they are legal.

Democrats are talking about taking away guns from moms. As one mother wrote, “I’m just like you. I’m just a mom with a gun, and my children are the three most important reasons why I have it.”

If moms rely on guns to ensure their safety and the safety of their children, why are Democrats trying to take them away?

Kimberly Fletcher is an author, radio host, and president/founder of Moms for America, a national educational corporation rooted in the principles of liberty and virtue upon which our nation was founded.