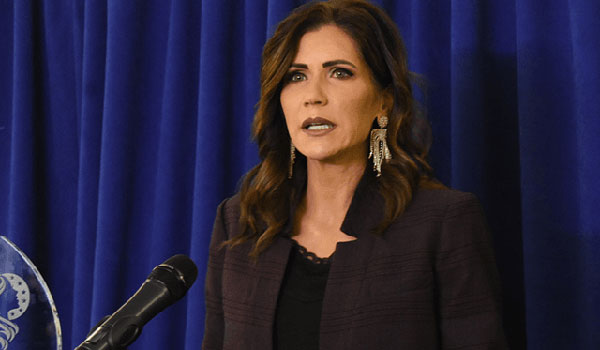 South Dakota Gov. Kristi Noem was in Washington, DC,  this past weekend with her husband, son, two daughters, and son-in-law, but the trip wasn’t related to politics or tourism. Noem was in town to accept Moms for America’s Mother of Influence award.

Kimberly Fletcher, founder and president of the non-profit, pro-family Christian organization cited Noem’s leadership in 2020 as the country faced the coronavirus pandemic.

“She speaks truth,” Fletcher said in her introduction of Noem. “She actually follows the science that they keep telling us we should follow and she institutes policies that are going to promote freedom and … to actually fix problems instead of creating them.”

“We need more people who will stand up for truth, for freedom, for family and be that common sense voice that we need,” Fletcher said.

“And really what our job is as mothers is to prepare them for life,” Noem said. “And the way that we do that is by letting them go through some hard times. Making them figure things out a little bit by themselves. Encouraging them but also making sure we’re allowing them to become those problem solvers that we need.”

Noem said she was “honored” to get the award.

“This is probably the most special reward I’ve ever received,” Noem said. “Because I love my family. When I ran for governor it as on building strong families. It was about South Dakota could be an example to the nation and we could do that by focusing on strong families.”