Karen Vaughn article on PJ Media: “Realities on the Border Demand a Reality Check by Our Politicians”

Realities on the Border Demand a Reality Check by Our Politicians 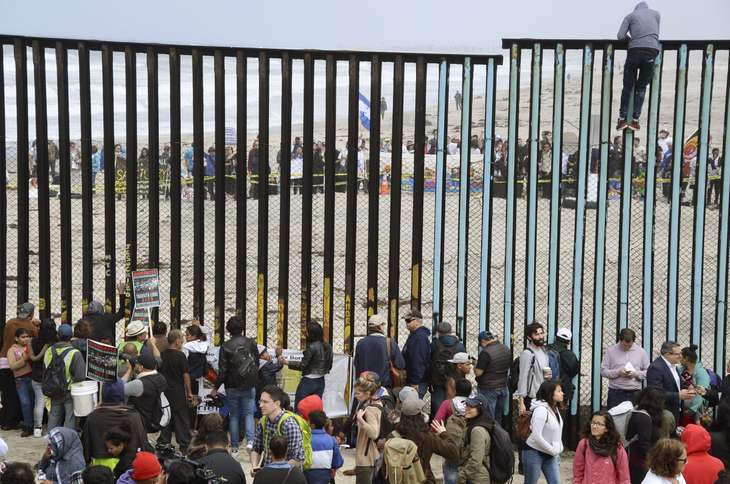 Immigrants from Central America reach the border in Tijuana, Mexico, to seek asylum in the United States on April 29, 2018. (Kyodo via AP)

Karen Vaughn is a Gold Star mother and vice president of Moms for America.

This past November Moms for America went “boots on the ground” in Hidalgo, Texas. Thirty-five women from across the nation left the comfort of our homes and chose to see for ourselves if the border crisis was manufactured or real. And trust me…it is very real.

What we saw and experienced was astoundingly difficult to take in. The first-hand accounts from mothers who actually live on the border not only made my skin crawl but stirred in me a righteous indignation for all who oppose helping those American families – women and children who’ve now been abandoned to be America’s first line of defense … women who sleep with shotguns in their bed and pistols in their nightstands because their lives have been threatened so many times by illegals congregating in their yard or attempting to enter the sanctity of their home.

At Moms for America, we stand with our president and urge him to never back down. Building the wall is the right thing to do. While we honor our brave and fearless border security agents, personal conversations with them revealed the truth that they can only do so much, and THEY NEED HELP.

During President Trump’s trip last week to McAllen, Texas, he spoke with a Border Patrol officer who offered a very chilling insight into the realities of apprehensions on the southern border. He explained that their sector alone had apprehended individuals from 41 different countries — 41!  In fact, in just in one day (Monday of last week) there were 450 apprehensions on the border in south Texas… 133 of which were people from countries other than Central America and Mexico.

This included people from India, Pakistan, China, Romania, and others. At this particular sector, family units and unaccompanied minors had typically made up between 60-70 percent of apprehensions. According to one Border Patrol officer, they’ve seen a change over the last couple of weeks that now makes that number less than 50 percent of total apprehensions in south Texas. This shift reflects an astounding exploitation on the vulnerability of our borders and demands our full attention.

The Border Patrol agent summed it up by saying, “where we have no fencing, over 90% of our traffic occurs in those areas.”

A recently released Harvard poll has found that roughly 80 percent of all American voters believe that the U.S. must secure our borders… including 68 percent of Democrats!

Americans understand this shouldn’t be about politics or party… this is about protecting our border! It’s about our leaders doing the right thing by our citizens.

I am the Gold Star mother of U.S. Navy SEAL Aaron Carson Vaughn. Aaron, my firstborn child and only son, gave his life on the battlefields of Afghanistan on August 6, 2011, fighting to protect the sovereignty of our great nation from enemies without.

With God as my witness I will draw my last breath on earth fighting to protect it from enemies within.

Now more than ever, we need to raise up young boys and girls who love America and stand ready to defend her. Future generations must indeed be “woke”… to liberty and the Constitution, not the Left’s totalitarian fad of the day. We need moms who know this and who are equipped to raise a generation of patriots. This is why we need Moms for America.

Moms for America is a national movement of mothers determined to reclaim our culture for truth, family, and freedom. We believe mothers have a unique power to heal America from the inside out by raising strong, formidable children who know, love, and respect our Constitution as well as the sacrifices that have been made throughout our history to protect and defend their unique and exceptional way of life.

Moms know that the real issues facing this nation won’t be solved by hashtags and clever speeches. Our true impact in this life can—and will—ONLY be measured by the difference we make in the lives of those around us and those who will one day follow in our footsteps.

That’s why when it comes to our freedom and security, Moms for America will never simply talk the talk. We will ALWAYS walk the walk and we will stand firm, unwaveringly, beside others who share our passion.

Click here to read the entire article at PJ Media