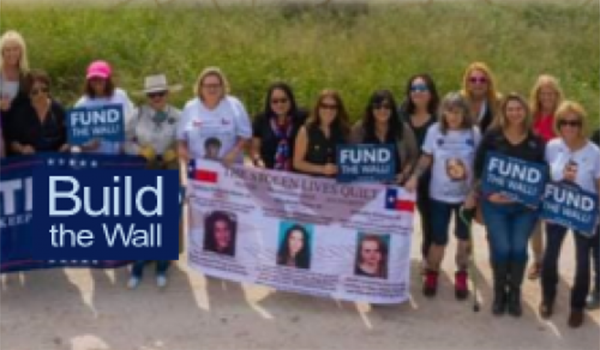 Recently, the city of El Paso has been the center of much discussion regarding border security. Moms for America traveled to the Texas town this week to speak with local residents about effective barriers to illegal immigration, and to hear what President Trump had to say about necessary funding for a border wall.

“Moms across this nation understand that to secure the future of this nation, we have to secure its borders,” said Kimberly Fletcher, president of Moms for America. “Protecting American families should the driving force behind any national security discussion, not partisan politics. Much has been said about the need for reforms to our immigration policy, but the locals see it as common sense. And every common-sense measure should be explored—including the construction of a border wall.”

While in El Paso, the President renewed calls for funding the border barrier along the Rio Grande, and derided the proposal to cut Immigration & Customs Enforcement (ICE) detention space, saying that such a radical measure would effectively release “dangerous criminals into our country.” President Trump went on to state that his administration was committed to ending illegal immigration while seeking to modernize the current system for legal immigration.

“We are thankful for the President’s commitment to securing our border, and for his support of the brave men and women of the Border Patrol and ICE.” said Karen Vaughn, Moms For America vice president. “Providing these agents the resources and technology they need–and the physical barrier that they are asking for–will be the key to ensuring a safe and sustainable immigration policy for years to come.”

During their visit, the MFA team met with a number of citizens who live and work close to the border, including Kris Massey, an alfalfa farmer from Animas, New Mexico.

“I have an issue with politicians that say walls are primitive and they don’t work,” said Massey. “Israel is proof that walls work. Israel has 150 miles of border with the Gaza Strip. In 2012 they had 5,500 illegals enter their country. In 2015 they finished construction on a 150 mile border wall. In 2016 they had 11 illegal immigrants enter. In 2017 they had zero. Walls work. Barriers work–barrier plus patrolling and immigration reform.”

MFA also interviewed several El Paso moms to get their perspective on border security issues, including Liz Uribe-Sinclair whose husband was a 3rd generation rancher and Mexican native who was killed by the cartel in 2013. All these stories will be shared over the coming week on the MFA Facebook page: Moms March for America.

Moms for America made national headlines with the “Moms Caravan to the Border” in November of last year. Two dozen women from 15 different states traveled to McAllen and Hidalgo, Texas, for a first-hand account of the status of border security in this nation. While there, MFA spoke to a number of local mothers to gain their perspective as to the realities of life as a border family. You can read more about the Moms Caravan here: https://momsmarchusa.com/caravan/

An additional “Moms Caravan to the Border” trip is planned for later this year. Details will be available on the MFA Facebook page: Moms March for America.