Moms Have Had Enough of Masking Flip-Flops 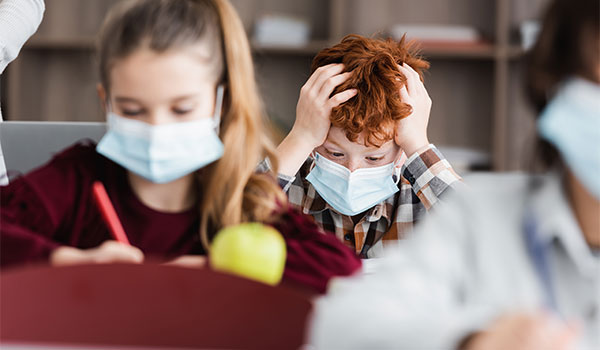 “Trust the experts,” we are told. If anyone is still taking the “experts” opinion on blind faith, they have not been paying attention.

The mainstream media has been relentlessly pushing the narrative that COVID-19 is the worst thing that has ever happened — while ignoring where it really comes from.

Many families were taken to the brink of economic ruin when the economy ground to a halt because of governmental decisions.

After that, the progressive elites in many blue states refused to lift restrictions and allow people to assess their own risk.

Never willing to surrender power, the elites are demanding new demonstrations of fealty to their reign. Talk of vaccine passports and sweeping vaccine mandates are now out in the open and hurtling forward.

Millions of Americans are realizing they may need to fight a potentially unconstitutional mandate to get an experimental jab just to keep their job or attend school.

Forcing school children to wear masks indefinitely is now under serious consideration by the teachers’ union and the bureaucracy under their thumb in numerous states.

Last week, the Centers for Disease Control and Prevention (CDC) Director Rochelle Walensky endorsed the idea of vaccine passports saying, “That may very well be a path forward.”

In justifying this system. Walensky explained how ineffective and unsuccessful the vaccines are.

According to the director of the CDC, studies show that even vaccinated individuals can transmit the virus.

In the power-mad minds of political activists, a vaccine so ineffective that people who receive it can still transmit the virus will wipe out COVID after everyone gets it.

At the same time that we learned how potentially ineffective the experimental vaccine is and how power-hungry unelected bureaucrats really are.

The Department of Justice (DOJ) issued an opinion that federal law does not prohibit government agencies and private businesses from requiring vaccination.

That news was met with celebration from the elites grasping to maintain their COVID power. New York City Mayor Bill de Blasio said, “I think that [vaccine mandates] will be helpful. We have got to put pressure on this situation.”

What de Blasio really means by “put pressure on this situation,” is that pressure will be apllied to those individual Americans who have evaluated their personal risk and don’t want to receive an experimental injection.

We have been told for the past year that there is a crisis in America.

The unelected government elites tell us there is a crisis of disinformation and a crisis of public trust. The real crisis is in the heart of every American.

Are we still a nation of free people, or are we a nation of top-down rule, sweeping mandates, and the forbidding of discussion and reason?

For an American, a citizen of a republic founded on principles of virtue and individual liberty, turning off your brain and allowing someone else to tell you what to do with no evidence is the antithesis of who we are as a people.

The Founders knew that education in virtue was the key to preserving the republic and ensuring liberty.

In a letter, Thomas Jefferson wrote, “I know no safe depository of the ultimate powers of the society but the people themselves; and if we think them not enlightened enough to exercise their control with a wholesome discretion, the remedy is not to take it from them, but to inform their discretion by education. This is the true corrective of abuses of constitutional power.”

In order to overcome the abuses of power and the ongoing threats to liberty wrought by the one year plus of COVID-19, we must remind our fellow Americans who they are and what our history has been.

Ours is not a nation in which government-appointed “experts” get to decide how we live our daily lives.

The twists and turns of the COVID-19 ride have been bewildering.

We have watched unelected bureaucrats grab power and continually change their guidance.

Moms have had enough, and they are beginning to fight back.

The good news is that hope is on our side.

If every patriotic mother in America teaches her sons and daughters the truth about our nation and the virtues required for liberty, the power-hungry elites don’t stand a chance.