Stop the Sexualization of America’s Kids 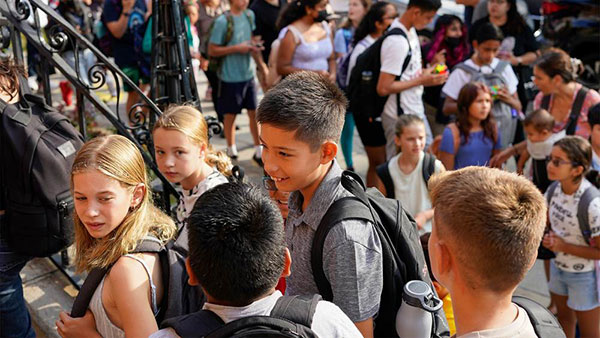 Protect Our Children:
Stop the Sexualization of America’s Kids

The opinions expressed by columnists are their own and do not necessarily represent the views of Townhall.com.

This week, the diabolical “Drag Queen Christmas” show ended a tour of 18 states, exposing children to inappropriate sexual content along the way. Drag shows, events in which adult men impersonate women with a heavy emphasis on sexual content and lewd behavior, are an assault on children’s innocence. Between “Drag Queen Story Hour” at the public library and these “family-friendly” drag shows at the local performing arts venue, moms have had enough.

Targeting children with sexual content is an attack on families that cannot be tolerated in a nation that cares about the future. After public pushback on the “family-friendly” drag show, the “Drag Queen Christmas” was marketed as “an all-ages show” that “may contain adult content.” “All ages” includes children, and moms will not stand for the threat to innocent children. Thankfully, some leaders are taking action.

The content was so shocking that one Missouri mayor banned children under 18 from attending the event. Chesterfield Mayor Bob Nation told the media, “We specifically in the City of Chesterfield have ordinances. Protecting minors and not allow[ing] minors to be exposed to certain types of entertainment of sexual orientation, etc.” As every city does! Hours before the show, the venue announced that no children under the age of 18 would be allowed to attend.

In Florida, officials are investigating the Fort Lauderdale performance after children were allegedly allowed to attend if accompanied by an adult. In the face of protests and escalating backlash to the sexualization of children, the “Drag Queen Christmas” was no longer called “all-ages” but instead presented as “adult content” by promoters. Yet, there were still children there.

It is no accident that children are in the audience of these heavily sexualized “shows.” That is the point. If children see lewd and indecent behavior at a young age, they lose their innocence and accept as normal what was once rightly recognized as a threat to the family and our civic order. Increasingly, we have seen graphic sexual content making its way into our schools; that, too, is on purpose. Like Critical Race Theory, activists claim it is not there, but courageous parents are exposing the lie and bringing light to the filth that is given to our children in the name of education.

As he was removed from the drag show by police, Nelson told officers, “You should arrest them for having children at this thing. That is who you should be arresting.”

The people grooming children are not getting arrested. Moms for America supports Governor Ron DeSantis and the other leaders taking a stand against inappropriate sexual content aimed at children. We are calling for recognition of the sexualization of children, whether from Comprehensive Sex Education in our public schools or from drag queen “shows” promoting adult sexual content. Plain and simple, this sexualization of children is child abuse. No child should be encouraged or coerced into exploring adult sexual content.

America has no greater resources than our children. As Nelson Mandela rightly noted of his own South Africa, “Our children are our greatest treasure. They are our future. Those who abuse them tear at the fabric of our society and weaken our nation.” The same is true for us and our precious children.

For years, Moms for America has opposed and publicly demonstrated against graphic sexual content in so-called Comprehensive Sex Education in our public schools and “drag shows” increasingly aimed at young children. These tactics are not new. For years, the Left has targeted children with inappropriate public displays. We saw in San Francisco with the notorious Folsom Street Fair how law enforcement turned a blind eye. Now, moms are fighting to ensure that their main street is not turned into a venue for strip club performers.

Educator Neil Postman wrote, “Children are the living messages we send to a time we will not see.” If we tolerate the sexual abuse of children, we are charting a dark course for our future. What message are we sending when we penalize and ridicule parents for teaching their children moral values and applaud parents for taking their children to events demonstrating open sex acts?

Parents deserve to know the truth of how dangerous this kind of exposure is for children. Parents who continue to bring their kids to events encouraging the sexualization of children should be called out. If they bring their children to such lewd public displays, we need to ask what is happening behind closed doors.

Our children are our future, and they deserve to grow up with hope and innocence. Moms will not allow the continued exploitation of our children, because there is simply too much at stake.